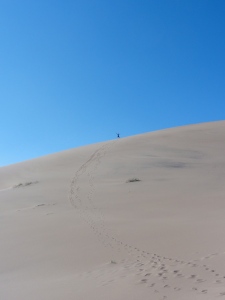 Within each of [us] lies the existential mystery of being. Apart from one’s physical appearance, personality, gender, history, occupation, hopes and dreams, comings and goings, there lies an eerie silence, an abyss of stillness charged with an etheric presence. For all of our anxious business and obsession with triviality, we cannot completely deny this phantasmal essence at our core. And yet we do everything we can to avoid its stillness, its utter emptiness and radiant intimacy.”  ~Adyashanti, The Way of Liberation

When I was a child, particularly after my family had moved a few times, and life had shown me that it was anything but constant, I became terrified of going to bed at night. Even then I can remember struggling to identify exactly what I was afraid of. I settled, finally on the answer that so many kids choose.

“What are you so afraid of?” My parents asked each time I cried about going to sleep.
“The Dark.” I responded.
“We’ll be you a night light, will that help?”
“A little I guess.”
And it did help, a little. I still got out of bed many times over to sit at the top of the stairs near the comforting sounds of the television, or to hear their voices in the living room. I knew not to go down, I would only get in trouble.

At some point I realized that there was no comfort to get. My parents were frustrated by what they perceived as my attempts to avoid bedtime and I lacked the language to explain that there was something else “out there,” or more accurately “in here” that was unsettling. I didn’t really think that anyone could explain it to me anyways.

When I settled into my bed at night and all the distractions of the day were gone, TVs off, video games silenced, toys put away, homework complete, and I was still and alone in my bed, I realized I wasn’t alone at all. There was something else going on, an energy inside my skin, a disturbance that wouldn’t let me sleep.

My child’s mind conjured up images of monsters in the closet, vampires under the bed, tornadoes outside the windows coming to sweep our house away, but what was scarier than all that was this darkness inside of me. It was weird and unwieldy and it seemed separate from my thoughts.  I couldn’t describe it to anyone, and I realized if I tried they would probably think I was crazy.

During the days I went to school and didn’t think about the nights. I did my reading, and social studies, I reluctantly worked at my math. Like any schoolchild I learned my numbers. And one day, either in class or from a peer, I learned about a number that was beyond all numbers, a number that was bigger than a trillion, a number I couldn’t even picture, it was infinity.

We tossed it around the playground,

It was kind of unfair to pull the infinity card because nothing could go beyond it, but once in a while, perhaps when we were sick of playing the game, someone said it.

I was fascinated by this word, which was part number, part concept. I tried to picture it as dollar bills or chocolate bars stretching out into outer-space further than anyone could actually see. Infinity. Forever. Never-ending, eternal, always and never. It was something my mind could not grasp.

A million, billion, trillion. A million toys, a trillion trees. A billion people. I mostly thought about these numbers as dollars, that was something I could picture. I thought about the bad guys in a movies who get ransoms for kidnapping. I wondered why none of them asked for infinity dollars, then they’d never run out of money or have to kidnap anyone for ransom again!

At night I lay in bed, sometimes with a small light on and tried to get to sleep. I actually counted sheep! Sometimes it worked, their big hairy white bellies flew past my eyes and sent me to slumber. But other nights it didn’t work. I tossed and turned and tried every falling asleep trick a ten-year-old can think of, in order to avoid what I knew was there. On those nights when sleep wouldn’t come I felt afraid, but I also felt compelled to experience it, this mysterious night time presence. And so I would press on my eyes with the backs of my hands until I saw stars behind my eyelids. When I opened them there was a moment when the room wasn’t there, everything was black, and The Dark wasn’t in the room, rather it was inside of me. I opened my eyes as wide as I could and I felt what I could never see. Infinity.